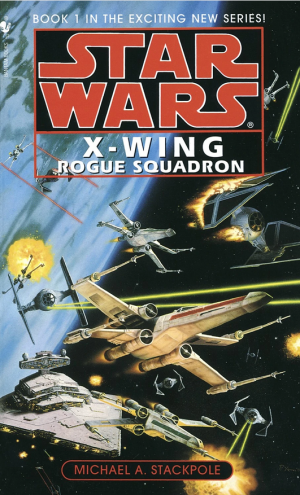 Impossible is our stock in trade, and success is what we deliver.
— Rogue Squadron motto
Pretty. What do we blow up first?
— Wraith Squadron motto
Advertisement:

The X-Wing Series is a sizable part of Star Wars Legends. This page covers the novel series.

The books are written by Michael Stackpole and Aaron Allston. Most of those run directly from the end of one book to the beginning of the next, but Isard's Revenge starts just after the last book of The Thrawn Trilogy, and Starfighters of Adumar and Mercy Kill each take place several years later. Each book is prefaced with "Star Wars: X-Wing", but we're trying not to develop Colon Cancer here. The books are:

The first four novels, written by Stackpole starting in 1996, are collectively and informally known as the Rogue Squadron series. They cover a self-contained plot concerning members of Rogue Squadron, a starfighter formation famous for two things: achieving mission goals that are thought suicidal and losing a lot of personnel in the process. Ascended Extra Wedge "Look at the size of that thing!" Antilles rebuilds the squadron from the ground up, bringing in pilots from all walks of life, including Ensemble Dark Horse Tycho Celchu and untrained Jedi Corran Horn. They have a crucial role in the New Republic strike to retake the Imperial capital of Coruscant, or Imperial Center as it is currently called. Their big enemy is Ysanne Isard, head of Imperial Intelligence and current de facto leader of the Empire, whose tactics include torturing/brainwashing people into becoming Manchurian Agents, using The Mole, and designing the Krytos Plague to induce a major case of Divided We Fall.

The next three novels, written by Allston, concern a second squadron founded by Wedge, and are informally called the Wraith Squadron series. Starting just after the end of The Bacta War, this series keeps Wedge and X-wings but takes on an entirely new squadron. Literally — Wedge forms it in the first book, looking back on the most successful Rogue rosters and realizing that they were fundamentally composed of pilots with commando skills, then mixing that idea with the odd Career-Building Blunder and amping it up as part of a gambit to avoid being promoted to General and becoming a Desk Officer. The Wraiths are a Ragtag Bunch of Misfits, commandos with flying skills, formed (initially) exclusively of pilots who are on the verge of being kicked out of service due to their various dysfunctions; their long-term opponent is the Large Ham Warlord Zsinj, who uses a Harmless Villain facade as Obfuscating Stupidity. This series is known for being much more focused on characters and humor than Stackpole's novels, but isn't without deeper themes. The end of Solo Command leads right up into the earlier-written The Courtship of Princess Leia.

Isard's Revenge, by Stackpole, takes place directly after The Thrawn Trilogy and concerns the efforts of Rogue Squadron to bring justice to Stackpole's Big Bad, who escaped — twice — despite her defeat in the Bacta War, and ties up a few loose ends left after the end of the comics.

Starfighters of Adumar, by Allston, though marketed as a Rogue Squadron novel, is really about Wedge himself; this is essentially his Day In The Limelight, focusing on his life, career, friends and love life (or lack thereof) during a diplomatic mission in which he attempts to bring the planet Adumar into the New Republic by winning a flying-duel-based popularity contest.

While the Rogues and Wraiths also appeared in the New Jedi Order and Legacy of the Force, the latest true outing of the X-Wing series is another Wraith Squadron novel: Mercy Kill, written by Allston, which was released in August 2012. It takes place primarily in the immediate aftermath of the Fate of the Jedi series, but fills in the time from the end of the Wraith Squadron books up to the "present."

Half mention also goes to I, Jedi, written by Stackpole and starring Corran Horn.

Unlike later multiple-authored series, the X-Wing novels are somewhat smaller in scope and fit into events established by other books and comics, often retconning little things to make events more sensible. There are some references between the games, the comics, and the novels; ties are most obvious between later comics and Stackpole's novels. Stackpole is known for getting along well with Timothy Zahn, and the two trade Shout Outs with some frequency. Aaron Allston also incorporates characters and events from the series into his mainstream entries of the saga, such as Wedge and the Wraiths in the New Jedi Order: Enemy Lines duology, or Wedge's family in his Legacy of the Force volumes.

Long story short, as Hobbie explains after the first test fight in Blade-32s, Tycho's a Fragile Speedster pilot stuck in Mighty Glacier hardware. This also may fall under The Worf Effect.