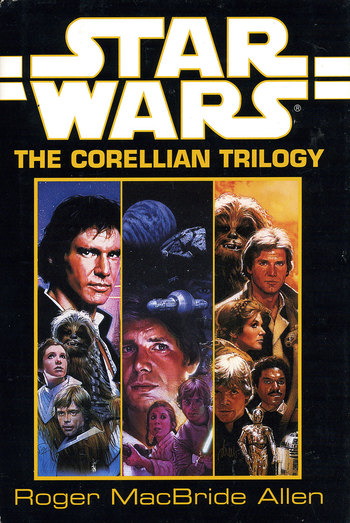 "What's [Corellia] like, Daddy?" Jaina asked... Han had hardly spoken about his homeworld, and had said even less about his life in the Corellian Sector... Now he would surely have to say something.
— Ambush at Corellia, Chapter 8
Advertisement:

Han and Leia, along with their children, pay a visit to Corellia, ostensibly for a vacation before a trade summit that will bring the formerly isolationist and rather xenophobic system back into galactic affairs; in the meantime Lando and Luke go on an amusing journey to find a wife for the Casanova ex-smuggler. However, New Republic Intelligence has been receiving disturbing reports that something nefarious is in the works in the formerly pro-Imperial system, and make Han their secret agent in ferreting out the truth. The summit, it turns out, is all merely a lure to gather prominent government officials all in one place so that the anti-alien Human League can instigate a hostage crisis, with the ultimatum that they must be be granted full power in the Corellian system (and all aliens deported), or else they will use their secret weapon to blow up stars until their demands are met... stars with increasing amounts of populated planets.

With communications jamming and an interdiction field preventing hyperspace travel in or out so that the New Republic government and military can do nothing to help, Han and Leia must fight alone for their freedom and to bring down their enemies (who include Han's evil bearded cousin Thrackan Sal-Solo as leader of the Human League)—with Han having to turn to a Selonian rebel and Leia depending on Mara Jade (there for the trade summit) for help. Their children, on the run in the Falcon and protected by Chewbacca and a Drallish tutor they'd hired before the terrorists struck, end up learning of mysterious Lost Technology which the Human League is desperately seeking and which may hold the key to both the "Starbuster" plot and how to put an end to the crisis. Meanwhile Luke and Lando, trying to find a way in to rescue their friends and loved ones, appeal to Gaeriel Captison and the Bakurans, who have ships with technology that can penetrate the interdiction field, while Tendra Risant, the lady Lando managed to get interested in his marriage proposal, struggles at subspace speeds to warn of the true villains behind everything.

The events of this trilogy were later referenced in several Del Rey-era series, notably New Jedi Order, Legacy of the Force, and Fate of the Jedi.