Not Enough to Bury 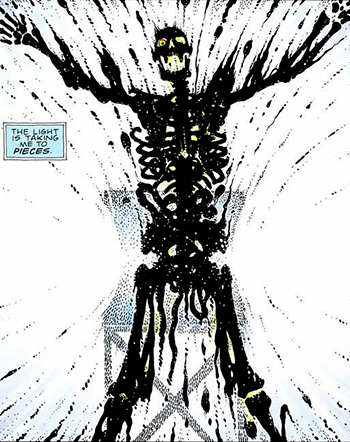 "They're going to bury what's left of ya in a soup can!"
— The Demoman, Team Fortress 2
Advertisement:

This is not quite Never Found the Body — it's found, all right. More specifically, bits and pieces are found. Usually refers to a very violent death, as either only a few measly fragments of a body are found, or it's been so destroyed you need a mop to clean it up and a bucket (not a body bag) to carry it in.

The inevitable result of Turbine Blender, frequent result of Ludicrous Gibs, and often a consequence of the Chunky Salsa Rule. Note that this doesn't preclude what's left of the person being buried, although sometimes alternate arrangements may be made.

This is sometimes used to trick the audience or characters into believing that someone is dead who is still alive, as they never found the rest of the body. The character may later show up with a prosthesis in the place of the missing body part, or a new outfit or weapon, if all that was found was their mangled accessories.

This is often used for those who die in explosions or burning buildings. Albeit it is typically used implausibly since, with the exception of nuclear explosions, neither usually possesses the power to completely atomize a human body.

As this is a Death Trope, beware of unmarked spoilers!