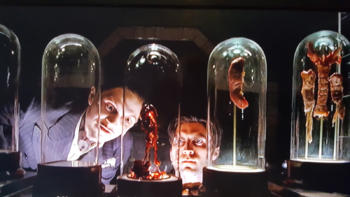 A hero in the hands of the villains receives an indirect threat (and a spur to their own personal feelings of impotence and despair) by being shown evidence of a past ally's suffering at the same villain's hands.

In fantasy, this is often put across by the display of an heirloom which the previous character owned and which was taken from him by the villains. In more modern or realistic settings, they are shown photographic or video evidence of the unpleasant changes the villains put the last hero through, often with a taunt of "Not very pretty now, is he?"

A frequent component of Revenge by Proxy since the point of that is to make the hero, not the victim, suffer.

The villain may actually display the ally or his corpse. If he is still alive, this may provoke a Mercy Killing on The Hero's part.

See also Finger in the Mail, Creepy Souvenir, and Forced to Watch.