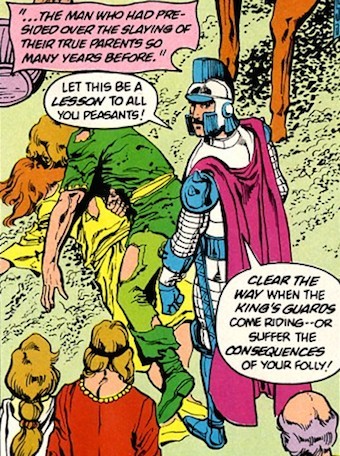 "I was late because I had to stop and slaughter two peasants who blocked my way for four whole seconds!"
"Nothing personal; I just had to shut you up."
— The Spy upon dominating a Scout, Team Fortress 2
Advertisement:

Our villain's had a bad day.

Maybe The Hero stole his girl, killed his favorite Mook Lieutenant, or blew up the third Elaborate Underground Base this month. Or maybe he's just an angry guy in general.

But whatever the reason, the point is that he's in absolutely no mood to be fucked with. So, of course, here comes some pitiable fool to do just that. The unfortunate loudmouth shows up just at the villain's most irate moment and immediately starts pissing him off even further.

...And the villain, being a villain, responds the only way he knows how.

Killing people for being annoying is an interesting way to Kick the Dog: for the audience, it can be either horrifying or cathartic, depending largely on how much of an asshole the victim was being. Though the two can overlap.

The "cathartic" side of this trope is usually used in more lighthearted shows, where the victim will have been bad enough to almost make you think they deserved it. They may even be a reflection of a common real-life annoyance, such as someone loudly talking on their cell phone during a movie or screaming at a waiter. The most extreme examples of this type overlap heavily with Bullying a Dragon - in other words, the victim was intentionally harassing his killer to the point where almost any sane person would've wanted to Kick the Son of a Bitch too.

The "horrific side" sees more use among towards the cynical side of the sliding scale, to show that the villain will kill anyone for the pettiest of reasons, such as speaking without permission or accidentally scuffing their shoes. In the most depressing examples, this trope begins to overlap with Shoot the Messenger: the victim was the Only Sane Man, genuinely trying to provide some very valid advice, and the villain just shot him in the face because he didn't want to hear it.

It also says a lot about the perpetrator. It's usually used to show that a character's Jumping Off the Slippery Slope, or is suffering a Villainous Breakdown. If a ruler does it, he just might be The Caligula. In more cynical works, it's often viewed as a Moral Event Horizon because of how petty it is and because the perpetrator feels a sense of self-righteousness in their actions.

Offing the Mouth is a Sub-Trope which deals specifically with characters who die for their snark. Compare Rage Breaking Point, Very Punchable Man, Shut Up, Hannibal!, Shoot the Messenger, You Have Failed Me, and You Have Outlived Your Usefulness, which are often more situation-specific examples of this trope in action.

The Life Of A Pirate Is Short

Captain Hook demonstrates how he deals with inconveniences when irritated by a crewmate singing an appropriately titled song.

The Life Of A Pirate Is Short

Captain Hook demonstrates how he deals with inconveniences when irritated by a crewmate singing an appropriately titled song.