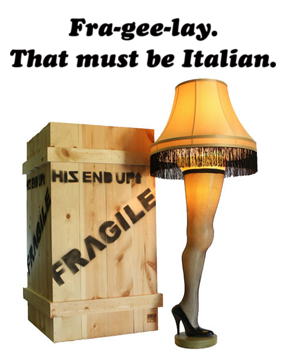 It's actually pronounced "FRAJ-əl"... or is it "FRAJ-eye'əl"?
"It's pronounced 'Bouquet'..."
— Hyacinth Bucket, Keeping Up Appearances. (It's "boo-KAY".)
Advertisement:

May overlap with My Nayme Is but not every name that's pronounced differently than its spelling would indicate is this trope. Compare also with Accent Upon The Wrong Syllable, Technical Euphemism, You Say Tomato (where people argue about how to say a word) and Insistent Terminology, with which it sometimes overlaps.

It's pronounced Bad-Gee (it's French!).

It's pronounced Bad-Gee (it's French!).