Film / The Adventures of Buckaroo Banzai Across the 8th Dimension 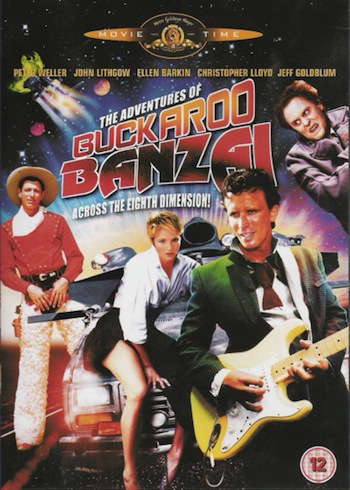 "Remember, no matter where you go, there you are."
— Buckaroo Banzai
Advertisement:

The Adventures of Buckaroo Banzai Across the Eighth Dimension is a 1984 film written by Earl Mac Rauch and directed by W.D. Richter that is one part B-Movie, one part Action-Adventure, one part comedy, and one part political satire.

It boasts some names that were quite famous in the 1980s and remain well known now:

Despite this rather auspicious listing of A and high B list actors, the movie was not well received in theaters. Once it was released to home video, however, it has since developed a cult following.

Brilliant scientist Buckaroo Banzai is a neurosurgeon, physicist, music star, spiritual guru, commando squad leader, globetrotting adventurer, and geopolitical consultant who fights hostile aliens, performs rock and roll (on multiple instruments, yet!), test drives interdimensional experimental vehicles, advises world leaders on how to prevent nuclear war, and studies the unknown. Surrounded by his faithful team of genius rockers, the Hong Kong Cavaliers, he travels the world pleasing the fans with music, and facing off against evil wherever he may find it.

In this adventure, one of many Shrouded in Myth, Buckaroo goes from surgery to the test of the dimension-hopping Jet Car, to a performance at New Brunswick, New Jersey night spot Artie's Artery. As Buckaroo turns the mood mellow with a solo piano performance of "Since I Don't Have You", a gunshot fires. Penny Priddy was trying to commit suicide, but because Buckaroo has many enemies, a misunderstanding results in her being arrested for attempting to kill him. Meanwhile, the Black Lectroids have sent an agent to Earth to warn Buckaroo that their historic enemies the Red Lectroids will try to steal his invention the Oscillation Overthruster (which the Jet Car used to enter the 8th Dimension) and use it to release their comrades from interdimensional exile. To stop them from causing trouble back on Planet Ten, the Black Lectroids will then fire a particle beam from U.S. airspace to the USSR, which will start World War III, which will hopefully result in vaporizing the bad guys. This, needless to say, does not bode well for Earth. The U.S. Government also wants the Jet Car for military applications. Buckaroo has a lot on his plate, but will he manage to save the world, get the girl, and keep the Jet Car from being misused?

In 2016, Kevin Smith, announced plans to produce a Buckaroo Banzai television series, a lead-in from his stint working with The Flash (2014). He would have rebooted the concept with the plot of the 1984 film functioning as the first season's story arc, leading to a projected second season based on the sequel-that-never-was, Buckaroo Banzai Against the World Crime League. Unfortunately, rights issues got in the way, as Rauch and Richter, the original creators, brought to attention that they may still retain the rights to Buckaroo Banzai, along with the TV rights, which led to lawsuits between MGM and the two creators, and Kevin Smith decided to walk away.

A sequel to the novelization based on Buckaroo Banzai Against the World Crime League was released in 2021, gaining mixed reviews from readers and critics, in large part due to its shock-value elements, unstructured and rambling plot, and its "warts and all" approach in its homage to classic pulp science fiction.

Not to be confused with the likewise outrageously alliterative rock and roll action comedy: The Adventures of Ford Fairlane.

Laugh while you can, MONKEY BOY!