Film / The Adventures of Elmo in Grouchland 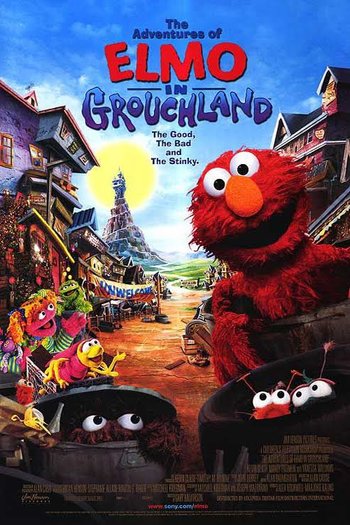 The Adventures of Elmo in Grouchland (1999) is the second Sesame Street movie, following Sesame Street Presents: Follow That Bird. This one centers around the lovable red Muppet Elmo. It is directed by Gary Halvorson, with the screenplay by Mitchell Kriegman and Joey Mazzarino and the story by Kriegman.

Elmo (Kevin Clash) loves his furry blue blanket more than almost anything in the world. When Zoe (Fran Brill) wants to play with it, he refuses, as it's his. They tug, and Elmo's blanket is nearly ripped—and a gust of wind blows it into Oscar's trash can and through a portal to Grouchland.

Elmo enters Grouchland to retrieve his blanket, but finds it just in time to have it stolen by Huxley (Mandy Patinkin), who considers everything to be his. Elmo embarks on an epic quest across the land to reach Huxley's home and rescue his blanket—and meanwhile, his friends are searching for him.

Elmo gets an un-welcoming message from the community of Grouchland, USA.

Elmo gets an un-welcoming message from the community of Grouchland, USA.