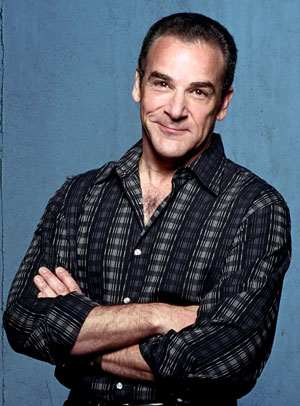 Hello! My Name is Mandy Patinkin. You killed my father. Prepare to Die!
"My whole life, I feel so blessed. I met my wife: I can't get over that I got so lucky. I have two incredible children. I can't believe that I've been so blessed. I've had a career that is way past anything that I've ever dreamed. I get to work in all these different areas with such extraordinary people on every level."
Advertisement:

Mandel Bruce "Mandy" Patinkin (born November 30, 1952 in Chicago, Illinois) is an American actor who has found success on stage and on the large and small screens.

On stage, he played Che in the first Broadway production of Evita (for which he won a Tony Award), originated the role of George in Stephen Sondheim's Sunday in the Park with George, and Mark in The Shadow Box, and Archibald Craven in the musical adaptation of The Secret Garden. He has also toured successfully as a concert performer.

As a film actor he is best known for his role as Inigo Montoya in The Princess Bride. His other roles include Avigdor in Yentl, Sam Francisco in the original film of Alien Nation, the villain in the Sesame Street movie The Adventures of Elmo in Grouchland, and 88 Keys in the film adaptation of Dick Tracy (a role which once again had him performing Sondheim).

On the small screen, his prominent roles include Dr Geiger in Chicago Hope, Rube in Dead Like Me, Jason Gideon in Criminal Minds and Saul Berenson in Homeland (with beard for the last). He guest-starred as Satan in an episode of Touched by an Angel (and sang Sondheim). He also voiced Papa Smurf in the 2017 film Smurfs: The Lost Village.

Tropes that relate to Mandy Patinkin: