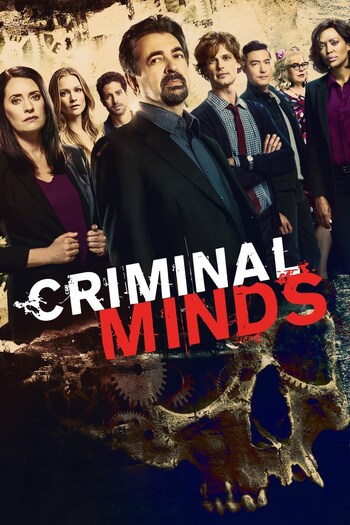 The way to a criminal is through his mind.
"He that fights with monsters must take care that he himself does not become a monster. And if you look long into an abyss, the abyss looks also into you."
— Aaron Hotchner, quoting Nietzsche. With good cause.
Advertisement:

These days, every Police Procedural needs a clever gimmick. Something that separates it from the pack. For Cold Case, it's the pursuit of old, unsolved cases. For Law & Order: Special Victims Unit, it's sex crimes. For CSI, it's solving crimes with magic. For Psych, it's TV and film references. For Bones, it's... Well, bones. (And magic.)

Criminal Minds revolves around a team of FBI profilers who use their knowledge of the human mind to get into the heads of the worst criminals — and catch them. The offenders who on other shows would merit a special event or multi-parter — serial killers who taunt the cops, school shooters, child abductors — are just this week's "UnSub" (Unknown Subject) to this team.

Beyond that, Criminal Minds is notable for a mostly gender-equal cast, its standards of realism for the motives of its criminals (who are often fascinating characters, though the mechanics of the crimes aren't always that realistic), and for the sympathy and respect with which it treats the victims of violent crime (and sometimes the perpetrators as well).

In 2011 it got an unexpected Darker and Edgier spinoff, Criminal Minds: Suspect Behavior. It was poorly received by the fanbase because it coincided with budget cuts to the original series, and only lasted one season.

In 2016 it got another spinoff, Criminal Minds: Beyond Borders, focusing on international incidents. It lasted for two seasons before it was cancelled due to low ratings.

In January 2019, it was announced that Criminal Minds would end at Season 15 with 10 episodes with the series finale released on February 19, 2020 as a two-hour special.

In February 2021, it was announced that a 10-episode revival would air on streaming service Paramount+, though later in the year, Paget Brewster indicated

the series had either fallen into Development Hell or been outright cancelled. However, it was confirmed to be back on in July 2022 with most of the cast returning barring Matthew Gray Gubler and Daniel Henney, who will not take part in the revival due to their busy commitments.

All fifteen seasons are available on Disney+.

Aaron Hotchner beats George Foyet, also known as The Reaper, to death after overpowering him with a table leg; considering Foyet killed his ex-wife and intended to kill his son, can you really blame the guy?

Aaron Hotchner beats George Foyet, also known as The Reaper, to death after overpowering him with a table leg; considering Foyet killed his ex-wife and intended to kill his son, can you really blame the guy?