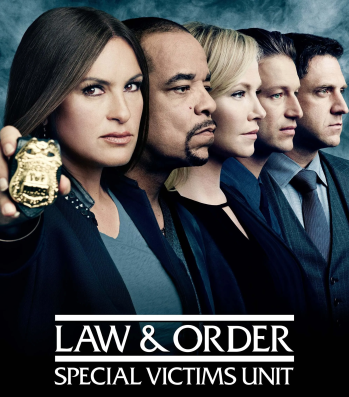 Standing For Victims
"In the criminal justice system, sexually-based offenses are considered especially heinous. In New York City, the dedicated detectives who investigate these vicious felonies are members of an elite squad known as the Special Victims Unit. These are their stories."
Advertisement:

The first spin-off of the Law & Order franchise. Like the original, the show features detectives investigating crimes and attorneys prosecuting the offenders. Changes in scene are marked by black screens stating the place and date, as well as the franchise's trademark "chung chung" noise. However, SVU focuses more on the detectives and less on the attorneys, whereas the original show usually shifts from the investigation to the prosecution at the halfway point.

The SVU detectives investigate sex crimes—usually rapes, rape-homicides, and various forms of child abuse. The voiceover at the beginning identifies such crimes as "especially heinous," and the show often focuses on the characters' struggle to deal with unspeakable crimes and living victims.

SVU has included since its beginning characters from two other shows: Capt. Cragen from the original Law & Order and Det./Sgt. Munch from Homicide: Life on the Street. There have been numerous Crossover events with the other Law & Order shows.

SVU was retooled between the first and second seasons. The first season featured more of the characters' private lives, random courtroom scenes unrelated to the episodes' primary cases, and much brighter lit squadroom scenes. Also, there were several recurring Assistant DA's instead of a regular character serving that function. Some early episodes did not feature a trial portion at all. At the start of the second season, ADA Cabot was assigned to the unit and the show began to more closely resemble the original Law & Order series.

The show is known for its dual-action It's Personal/Idiot Ball trope, in which each episode will usually feature one of the main detectives developing an extremely personal, unprofessional attachment or aversion to a victim or criminal, due to their personal history. This may sometimes cause them to follow false leads, or fall under suspicion and need to clear their name. These will manifest themselves in just about any episode that deals with crimes of a certain nature. Characters with "hot-button" issues are:

This trope works backwards too; we learn more about the detectives by noticing what kinds of people they empathize with. When the usually cool attorney Casey Novak is uncharacteristically lenient to a young girl who committed vehicular manslaughter while off prescription medicine (thanks to following the advice of a popular artist who was against them, after his own tragic story), you later find out that, quite predictably, she has a personal history with mental illness—her ex-fiancé (who she abandoned and later found in the streets) suffered from schizophrenia.

. The primary audience probably doesn't watch the original (we hope).

Character Sheet can be found here.

Not to be confused with the Special Vehicles Unit.

For a while SVU was currently the only American Law & Order series still in active production, following the cancellation of Criminal Intent in 2011. In 2019 it began production on its 21st season, thus surpassing the already incredibly long run of the Mothership. As with another famous and long-running crime drama, NCIS, it is suspected that the show will continue for as long as its star — in this case Mariska Hargitay — wants to do it.