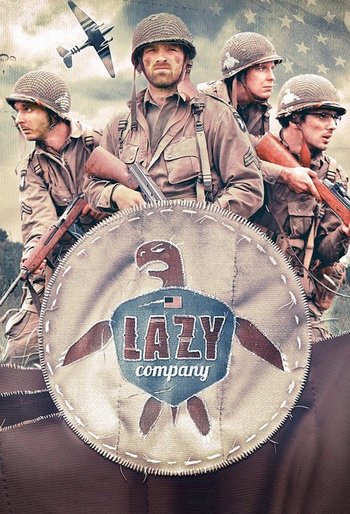 The four main chuckleheads. From left to right, Corporal Niels, Sergeant Chester, Private Slice, and Private Henry.
General Paxton: I don't know if you're aware of that, but there's a war on! We're not here to fool around with guns! You're a disgrace to the army. No, you're not even a disgrace, you're morons! That's it! Big ol' MORONS! You're a moron, you're a moron, and you're a moron!
Sergeant Chester: Which moron is he talking about? I lost track.
Major Spring: He means you.
General Paxton: SHUT UP!!
Advertisement:

Lazy Company is a French series, created by Alexandre Philip and Samuel Bodin, broadcast on premium movie/series channel OCS Max. There are three seasons of 10 episodes (26 minutes) each.

It's set in summer 1944 France, during the Battle of Normandy (except the first episode, which is before D-Day). While Easy Company is fighting their way through Nazi-infested Norman countryside, four losers are banded together after a spectacular bungle and given the derisive nickname of "Lazy Company" (because "stupid clowns" company was tried and rejected).