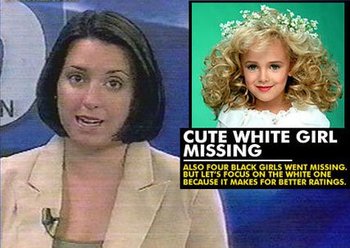 Delko: Blonde girl's missing and the National Guard turns out to help. Hispanic girl, no one gives a damn.
Calleigh: I think there are a lot of people here.
Delko: Oh, come on, Calleigh. You saw the media's response to Lana Walker. You know? Where were the yellow ribbons for Consuela Valdez? The recovery center? It's the same song, you know? You want any real attention in this world, you got to have blonde hair and blue eyes. (To Calleigh) No offense.
Calleigh: None taken. My eyes are green.
— CSI: Miami, "Death Grip"
Advertisement:

The term Missing White Woman Syndrome describes how Western media will focus on the murder, kidnapping, or disappearance of Caucasian females — usually pretty, young, and middle- or upper-class — to the exclusion of male, minority, poor, or disabled missing persons.

The origin of the term is unclear. Although Professor Sheri Parks of the University of Maryland claims to have coined it circa 2005, it apparently has been in use among journalists (and Fark.com) for years before that (Gwen Ifill used the term in a panel discussion in August 2004, for example). It's also been referred to as "missing pretty girl" syndrome and "Damsel in Distress" syndrome. In particular, the United States (and to a lesser extent Canada) has the AMBER Alert, which is a special alert code for child abductions and was named for the young white daughter of influential parents.

The most likely ignored missing person is the Disposable Sex Worker and/or the Disposable Vagrant. For more information, including a detailed breakdown of the coverage cycle and links to dozens of cases, see this article

at Wikipedia. This column

at CNN.com has some thoughts on it, and in the years since this trope entry was first written many more writers have weighed in on the topic.

In fiction, writers tend to be more savvy and aware of the use of this trope, but often invoke related cultural sensibilities like Vasquez Always Dies and Final Girl.

Compare If It Bleeds, It Leads, Local Angle, Worst News Judgment Ever.

During a press conference, the police state a 9-year-old girl was killed in a bus accident only to reveal that the girl was a Latina. The reporters gripe that it isn't news

During a press conference, the police state a 9-year-old girl was killed in a bus accident only to reveal that the girl was a Latina. The reporters gripe that it isn't news