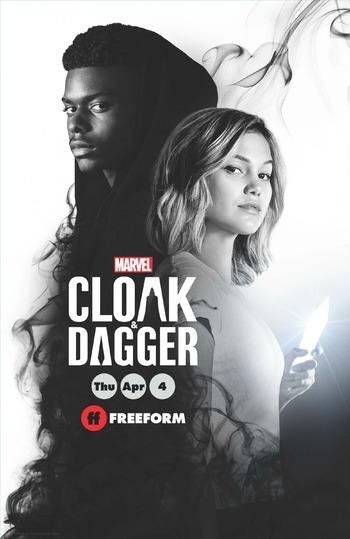 Cloak and Dagger is a superhero/romance series airing on Freeform, based on the Marvel Comics characters of the same name. Like many other shows produced by Marvel Television, it is set within the expansive Marvel Cinematic Universe, alongside ABC's Agents of S.H.I.E.L.D. and the Defenders franchise on Disney+.

Tandy Bowen (Olivia Holt) and Tyrone Johnson (Aubrey Joseph) are emotionally damaged teenagers with fantastic abilities that appear to be triggered by one another and which they must keep secret from others: Tandy forms and manipulates light constructs, while Tyrone can teleport when in a shadow and cover himself (and others) in darkness. When a chance meeting brings Tandy and Tyrone together, their lives become a lot more complicated than they already were.

In addition to Holt and Joseph, the series also features Andrea Roth as Melissa Bowen, Tandy's mother attempting to adapt to a new life; Gloria Reuben as Adina Johnson, Tyrone's mother who spends more time improving her son's life than she does loving him; Miles Mussenden as Otis Johnson, Tyrone's father stuck at a desk job for his family's sake; Carl Lundstedt as Liam, Tandy's partner-in-crime masquerading as a boyfriend; J.D. Evermore as Detective Connors, who hides a close secret with an intimidating persona; Noëlle Renée Bercy as Evita Fusilier, a classmate of Tyrone's who has her own part to play; and Emma Lahana as Detective Brigid O'Reilly, who might be the only good cop in the NOPD.

In August 2019, it was announced that Tandy and Tyrone would be crossing over with Runaways in the latter's third season, marking the first instance of a crossover between two Marvel Television series on different networks.

On October 24, 2019, it was announced the 2nd season was going to be its final one as the series was canceled.

The recap page is in construction.

Cloak and Dagger contains examples of the following tropes:

Tandy: Pancakes or Waffles?
Tandy: Do you think we can do it?
Tyrone: What’s that?
Tandy: Be good... be heroes... be divine and paired in other places?