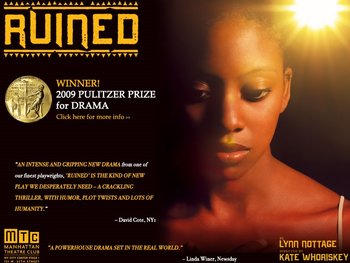 Ruined is a 2008 stage play by Lynn Nottage.

It takes place in the Democratic Republic of the Congo, during The Congo Wars. The setting is a mining town where one Mama Nadi owns a bar/poolroom/brothel. Waitresses serve food and drinks and also provide horizontal services. Workers from the local tin mine patronize the bar as do soldiers from various warring factions. In the opening scene Christian, a traveling salesman, drops off his niece Sophie at the bar, looking for a place of semi-safety for her in the lawless violence of the Congo.

The theme is the brutality of war and how it is inflicted against women.

William Jackson Harper, who later became famous as a regular on TV series The Good Place, appeared in the original cast playing several roles, the most prominent being Simon, government soldier and buddy to Salima's husband Fortune.