Series / Without a Trace

You may be looking for Without a Trace, a 1983 drama film directed by Stanley R. Jaffe. 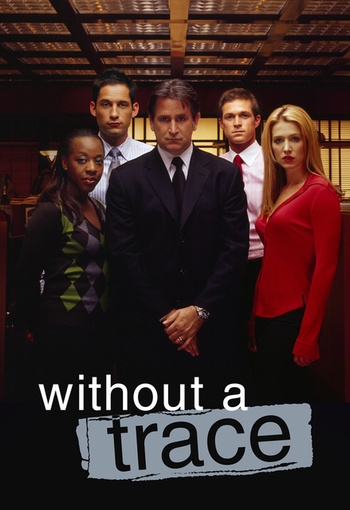 Another show (2002-2009) in the CSI Verse from the CSI-SVU school of "let's focus on a lesser-known faction of the criminal investigation world"; this one takes a look at the FBI's missing persons unit. It's hip and gritty and hyper-edited like its contemporaries, with a similar focus on the cases rather than investigators; it sets itself apart, however, by having a more emotional interest in the cases than procedural, which is greatly helped by a top-drawer performance from Anthony LaPaglia.
Advertisement:

It should be noted that while the investigation should stop with the discovery of a body, the unit very frequently ends up investigating murders along the way as well as that of the missing person, should that scenario appear.

Without a Trace provides examples of: