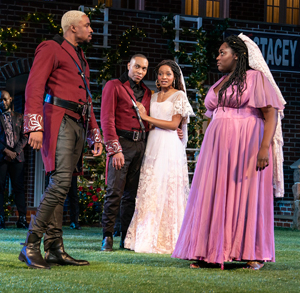 The Beta Couple is present in the backdrop of many Romantic Comedies and Dramas with The Hero of the story looking at wooing their Love Interest, to provide a Foil to his/her efforts you will see one of their closest friends have a remarkably easier time getting together. This "simpler" pairing is the Beta Couple.

The Beta Couple is always a secondary pairing (and foil) to the primary relationship. Often they are friends or confidants of one or both of them, it's not uncommon for The Hero and his wingman to simultaneously try to hook up with the heroine and her maid of honor.

Usually, they serve as a barometer for how well or poorly the main (alpha) couple is doing and offer possible solutions to any problems. Hit a Poor Communication Kills? The Beta Couple had that but worked it out. Caught cheating? Losing "the spark" for your Love Interest? The Beta Couple had that, and here's how they got through it. In addition to all of that, if there is sexual tension that the Official Couple is oblivious about, the Beta Couple is all the more aware of it and will try to help them embrace it.

For these reasons, things tend to go more smoothly for them, letting them work as catalysts for the alpha couple's romance. That said, the Beta Couple is usually a source of comedy, and as such have more freedom to be unconventional and kinky and less problem (or at least conflict) prone than the alpha couple.

While the Beta Couple usually consists of secondary characters, sometimes the author(s) will decide that the main character has enough crap to deal with, make his relationship the Beta Couple, and make the bulk of the romantic conflict in the story concern the sidekick's relationship.

Because having multiple couples is convenient for writing musical numbers in contrasting styles, adapted musicals often develop characters absent or barely present in the source material into Beta Couples. Musicals traditionally assign the Alpha Couple better singing voices than the Beta Couple, who get more opportunities to dance (especially if they're the juvenile type) and/or crack jokes.

Has absolutely nothing to do with The Alpha Couple, surprisingly.