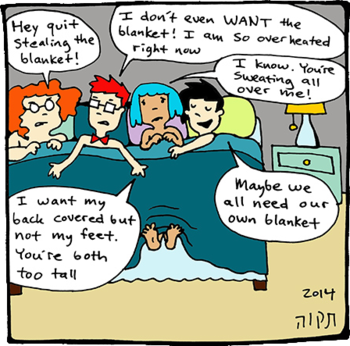 Polyamory can lead to drama in bed.
"Open relationships are not nearly as socially accepted as they were in the 1960s and 1970s, at the peak of the sexual revolution. But they do work for some couples, provided there's a tremendous amount of trust and commitment."
— Dr. Laura Berman and Dr. Jennifer Berman, For Women Only: A Revolutionary Guide to Reclaiming Your Sex Life
Advertisement:

Rather than requiring someone to pick one person out of several potential love interests, or adultery, all parties involved agree to be together and share cooperatively. This typically lacks any drama of the decision itself, but has a different form of drama in how people make arrangements with each other, manage jealousy and households, and deal with the disapproval of society as a whole.

Individuals who identify as polyamorous may consider themselves "Ethical Sluts". Not all ethical sluts are polyamorous, and not all people in polyamorous relationships have the "ethical slut" attitude. The difference between a polyamorist and a swinger is that a polyamorous person has broad-spectrum involvement in their partners' lives, including love. Swingers are largely there for the sex, often for the novelty of an unfamiliar partner.

Polygamy is a subtype of polyamory, as it means more than one spouse, while with polyamory, marriage and dating both count. In Real Life its often subject to Insistent Terminology, with polyamorists and polygamists trying to disassociate the two. The actual difference, though, is basically just the cultural trappings and whether the practice is considered traditional or modern.

Not to be confused with Polyarmory.

For more details and some Real Life tidbits, visit Useful Notes On Polyamory. Truth in Television, obviously, though how culturally accepted it is varies wildly depending on the place, time period, and social standing. Currently, polygamy is Banned in China (plus all Western countries), but still legal in some parts of Africa and Asia. note For China, polygamy had always been banned. China practised a concubinage system, whereby a husband can only have one legal wife, but multiple concubines of lower legal status. Polygyny where wives are of equal status had always been illegal, and had been considered a crime in some dynasties. In family laws from the Tang to Qing dynasties, the status of a wife, concubines and maid-mistresses couldn't be altered.