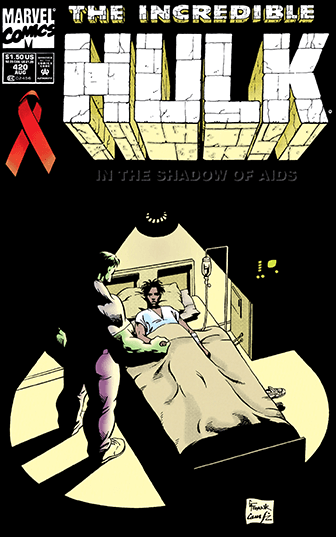 Will I lose my dignity?
Will someone care?
Will I wake tomorrow,
from this nightmare?
— "Will I?", RENT
Advertisement:

A story about someone being diagnosed with the Human Immunodeficiency Virus (HIV), which can develop into Acquired Immuno-Deficiency Syndrome (AIDS), formerly known as GRID (Gay-related Immune Deficiency

), and not surviving. In most of the 1980s and '90s, the virus was pretty much a death sentence until antiretroviral medications in the early 2000s became more effective and accessible in keeping the virus under control.

Most storylines featuring AIDS show a long, painful, death. The drama comes from the way that family and friends react to the character's diagnosis: is there an internal battle and then resolve to stay and help in hospice, or do they get sick at the idea of either watching their loved one die or watching how they dienote This often involves Kaposi's sarcoma lesions, dementia, and extreme weight loss; dying of AIDS is not pretty, and run away? Expect a lot of angst. A lot of characters who end up with this line of treatment are gay and usually men, but that's not always the case. Still, it was a common way to Bury Your Gays.

This can be, from even the earliest outbreaks in The '80s, a case of Reality Is Unrealistic — trial medications like AZT helped some people, whereas others seemed to have bodies that miraculously cured themselves. As detailed in the "Where Are They Now?" Epilogue of Pride (2014), the third man ever to be diagnosed as HIV-positive is still alive today.

This trope is less common in work set after the 1990s, as advances in medicine mean most HIV-positive people in the developed world are able to keep the virus in check. It doesn't become AIDS until the immune cells fall below a certain level, and most people with the virus today are able to live their lives without ever reaching that point. In fact, when you do see characters with HIV in modern-day works unless it's Historical Fiction and/or set in a developing country, their plotlines usually have more to do with living with the virus rather than dying from it. Still, AIDS was a defining specter for an entire community for almost twenty years, and to this day it still affects millions around the world.

Contrast with the unsympathetic Karmic STD, which involves people contracting STDs for malicious behavior (or at least what the writer assumes to be malicious). Also contrast STD Immunity, where a story ignores the possibility of any venereal disease.