Theatre / The King and I 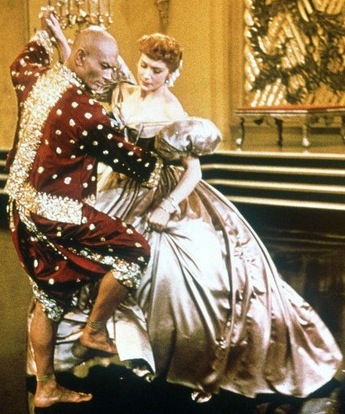 Shall we dance?
Haven't you noticed suddenly I'm bright and breezy?
Because of all the beautiful and new
Things I'm learning about you, day by day
—"Getting to Know You"
Advertisement:

Originally conceived as a vehicle for actress Gertrude Lawrence, Rodgers and Hammerstein's sixth musical tells the story of Anna Leonowens, a schoolteacher from Wales who travels with her son to Siam to teach the children of the King. It covers their entire history. From the beginning, at least according to Anna's account, they had repeated clashes personally, professionally, and culturally. The last two are related, since she was hired to teach his children, wives, and concubines about Western culture and bring Siam up to date, which is difficult when the King believes she is wrong. All the while, in the greatest tradition of adversarial love stories, they fall in love with each other.

Gertrude Lawrence brought the idea for the musical to Rodgers and Hammerstein after seeing the 1946 film Anna and the King of Siam with Rex Harrison and Irene Dunne. The original Broadway production received five Tony Awards, including Best Musical, Best Actor, and Best Actress. Additionally, the Broadway revivals from 1996 (starring Donna Murphy and Lou Diamond Philips) and 2015 (starring Kelli O'Hara and Ken Watanabe) won Tony Awards for Best Revival of a Musical.

In 1956 the musical was adapted into a movie starring Deborah Kerr and Yul Brynner, the latter of whom also originated the role of the King on Broadway. (In 1972 he also played the King in the TV Sitcom Anna and the King - Samantha Eggar played Anna here.) In 1999, it was yet again made into a movie, this time animated, that has its own page.

See also: Anna and the King.

The King And I contains examples of:

Alternative Title(s): The King And I