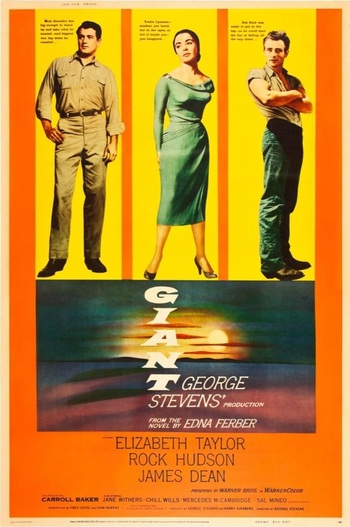 Giant is a 1956 Epic Movie directed by George Stevens, starring Elizabeth Taylor, Rock Hudson, and James Dean. Adapted from the 1952 novel of the same name by Edna Ferber, the film is more famous for being James Dean's last role (some of his lines had to be dubbed).

The film, which spans from the 1920s to the early '50s, is a saga of the Benedict family, beginning when Texan Rancher Jordan "Bick" Benedict (Hudson) heads east to Maryland to purchase War Winds from Dr. Lynnton and ends up marrying his daughter, socialite Leslie (Taylor). They start life at Bick's ranch, Reata, and have three children. Leslie, who has a hard time dealing with the sexism and racism of Bick and bascially everyone around her, leaves Bick for a time but they eventually reconcile. After Bick's sister dies, she leaves local handyman Jett Rink (Dean) a small plot of land, which he refuses to sell to Bick even though he's offered twice its value. He then strikes oil, which eventually happens around the region with even Bick getting rich off oil after he swore to keep the ranch only cattle. Bick's attitudes are put to the test when his kids grow up and not only do none of them want to run the ranch after him, but his only son Jordy (Dennis Hopper) marries Juana, a Mexican-American.

The movie culminates in the opening of Jett Rink's hotel and airport, and at the big party Jordy tries to fight Jett Rink when he finds out that him and his wife were only invited so that Jett's employees could deny them service. Bick almost gets into a fight with Jett away from the eyes of the people, but is so disgusted by the wasted, over-the-hill shell of a man that Jett has become that Bick simply tells him there's no point in beating him down — and later Jett passes out at his own party. Later on the way home, they stop at a diner and Bick gets into a fight with the racist owner when he refuses to serve a Mexican family — while he doesn't win the fight, he does reignite the love and respect of his wife.