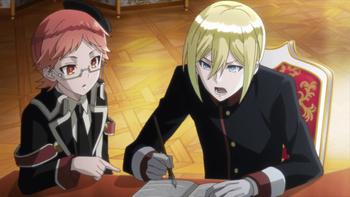 A private tutor is a teacher who is hired by a family to teach to only one pupil or to a small group of children or youth. Less commonly, adults may get private tutoring in a topic such as foreign languages.

There are mainly two types:

If tutor and tutee are sufficiently major characters, and post-pubescent, nine times out of ten this will end in a Teacher/Student Romance. Music tutors are most susceptible to this, likely because music stirs the passions of the heart.

This is a quite modern trope. Regular schools for children didn't start to appear until the medieval age, and then only in larger cities. Up through the entire 19th century, working as a governess was a quite common and respectable job for single women. As such, most examples before then would be a case of People Sit on Chairs since private tutors were the main source of education.

See also Homeschooled Kids, who, if not taught by their parents, will probably have one or more private tutors, and the Magical Nanny.