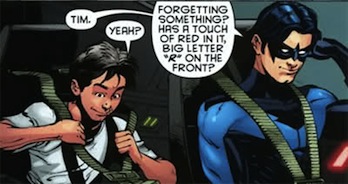 One Robin to another.
Advertisement:

This character is the hero's good friend. The hero (or whoever his protege may be) can goof around with him, go to the bar with him for a drink and talk about some good old man-business with him. Additionally, the character, being older (though mental age matters more than physical age) and wiser than the hero, also acts as a mentor to the hero in times of need or advice.

However, just because the Big Brother Mentor cares about the hero doesn't mean that he won't rebuke him if he gets out of line, and he would even go as far as to deal with him physically. He only wants the best out of the hero, but won't hesitate to educate him the hard way if the hero shows reluctance to learn or has a tendency to run headlong into danger. In essence, he's the ideal big brother figure who knows when to get friendly or strict.

Female variants of this trope, or examples where the protege is female, are much less common but not unheard of.

In anime, this kind of character is often addressed using the more informal "aniki" instead of "onii-san".

Often, this character is doomed to die—both to bring the hero out of the character's shadow and to give the character an emotional buildup.

This is a subtrope of the Mentor Archetype.

If he and The Hero are romantically involved, or just have enough Ho Yay or Ship Tease, this can become Lover and Beloved or a Mentor Ship. Differs from Aloof Big Brother in that the Big Brother Mentor doesn't have to be a literal big brother and actually gives a damn about his "little siblings" (or shows it quite more often than a merely emotionally repressed Aloof Big Brother). Compare with the Stern Teacher, tough and strict but loved by everyone. Contrast with Disappointing Older Sibling. Not to be confused with Draco in Leather Pants.