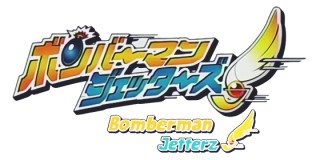 (Or Bomberman Jetterz, alternatively, but we Spell My Name with an "S" around here, just like in Wikipedia.)
Advertisement:

The Jetters are an intergalactic police force apparently formed for the sole purpose of fighting the Hige Hige Bandits, a spacefaring criminal organization with the single goal of amassing all the one-of-a-kind objects in the universe. The battle against the Hige Hige Bandits is going well, until the leader of the Jetters, the infallible Legendary Bomberman Mighty, goes MIA after the first episode. The Jetters need a new Bomberman for the team, and believing badassery to be In the Blood, go straight to Mighty's younger brother, White Bomber.

Problem is, White Bomber is Just a Kid, and the Jetters suddenly find themselves on the losing end of the fight. This isn't helped by the appearance of a new secret weapon the Hige Hige Bandits are fielding: a sinister Bomberman called MAX, whose techniques are highly reminiscent of Mighty's…

Make no mistake, Bomberman Jetters really is a kids' show, but for all that, it's pretty well done. The writers have skillfully avoided the problems associated with The Anime of the Game by doing their absolute best with the source material, which turns out to be quite a lot as the series moves from a Strictly Formula Monster of the Week show into compelling drama with more Character Development than you can shake a stick at. You kind of even stop hating White Bomber in the end.

Highly recommended for children and the childlike, as well as Bomberman fans who can get over the fact that MAX is the bad guy now.

Had a Recursive Adaptation in 2002 with Bomberman Jetters for the GameCube, which was largely a sequel to Bomberman Generation from earlier that same year. The game ended up being all that Western audiences saw of Jetters.