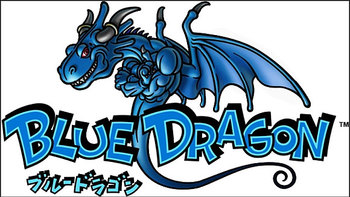 The other game created by Hironobu Sakaguchi and Akira Toriyama.
Advertisement:

Blue Dragon started out as a 2006 Role-Playing Game for the Xbox 360, developed by several of the people behind the Final Fantasy series and the artwork of the Dragon Quest franchise. It's basically Akira Toriyama, Hironobu Sakaguchi, and Nobuo Uematsu'snote called the Square Dream Team by fans, as they previously collaborated on Chrono Trigger attempt at a Cliché Storm, after seeing how cliche RPGs had become.

Shu, Jiro and Kluke live in a remote village that, once a year, is attacked by a mechanical creature known as the Land Shark. One year, in an attempt to fight it off, they are carried off by it to the flying fortress of the ancient Nene, where they are trounced and a mysterious voice grants them Living Shadows with the ability to use magic.

Stealing (and crash-landing) an airship, they set off to get home and find a way to take down Nene for good...

A sequel/spin-off was produced for the Nintendo DS in 2009. It was called Blue Dragon Plus, which is a Strategy RPG in which nearly all of the supporting cast from the first game also gain Shadow magic powers and join the main party.

A final third Action RPG DS game, Awakened Shadow, starring another customizable hero/-ine, was released worldwide in 2010. After literally everyone gained Shadow Magic in Plus, it's disappeared from the world and the player character has to help Shu and friends bring it back. Its single player mode suffered, to say the least, from a focus on multiplayer and an overall lack of polish; although it is a nice alternative to Tales of the Tempest.

In Awakened Shadow, the Hub Level becomes littered with inter-dimensional doors leading to a dozen Bonus Bosses that are nearly impossible to defeat in single-player, with some hidden dungeons that could have benefited the game's short main quest had they been included.

There was also an anime adaptation that had a different plot and introduced a new girl, Bouquet (who had the strange ability to become invisible while naked), along with her Hippo Shadow, to the cast. The dub went through some pretty heavy editing in places, mostly due to how Bouquet was presented in the original. The anime eventually received a sequel called Blue Dragon: Trials of the 7 Shadows and begins by following Shu and Bouquet, two years later, dealing with the aftermath of the events in the previous series. Both anime adaptations are 51 episodes long.

The entire anime series is available uncut on Hulu

(provides a link to the sequel as well).

The anime and manga adaptations include examples of: