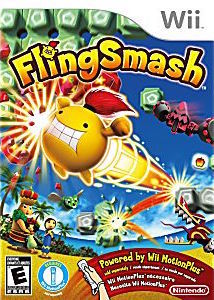 FlingSmash is a Video Game for the Nintendo Wii developed by Artoon and published by Nintendo. It is most notable for being one of the first Wii games that required the use of either the Wii MotionPlus accessory or a Wii Remote controller with MotionPlus integrated.

When the tropical Suthon Island is invaded by the evil Omminus, the ball-shaped hero, Zip, is summoned to save the day. Using swinging motions, the player must fling Zip to smash through oncoming barriers and enemies in a Pinball-style side-scrolling action game. A second player can control Zip's friend, Pip, for two-player cooperative action across the game's eight levels.