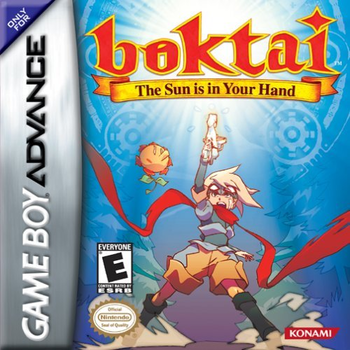 Bokura no Taiyou ("Our Sun") in Japan, Boktai is an action RPG series produced by Hideo Kojima. Django is a boy hoping to follow in the footsteps of his disappeared father, Ringo, as a vampire hunter. With his (not-so; see below) trusty weapon the Gun Del Sol, and the sun spirit Otenko by his side, he takes on zombies, demonic dogs, vampires, and Norse mythology-derived what have you.

The original GBA trilogy featured an interesting gimmick; each game came in a unique cartridge with a UV light detector (the UV light didn′t actually need sunlight in 99% of cases. Do you keep a UV lamp around the house or something? Even a black light or a plasma globe would work.) Django's gun is quite literally powered by the sun; sunlight is required to charge its battery. If you were starved for sunlight, the stealth element of Boktai would come into play instead. Django can sneak around and knock on walls to distract enemies, at least until you get to an in-game sunlight source or find a real-world one.

Unfortunately, this interesting gimmick proved to be the games' undoing. Playing outside in the sunlight is a bit of a turn-off (especially in places with very hot summers... like Japan). Despite decent critical reception for the whole series, the games sold poorly internationally and the third installment never left Japan. Being the dashing, people-pleasing epitome of suavete the man is, Kojima wised up and delivered a DS sequel (Lunar Knights) without the trouble of needing sunlight in the real world. (The system's double-slot feature allowed players to use the solar sensor by inserting the GBA cartridges from previous games, though.) However, in localizations, this sequel severed ties with the original Boktai series by renaming many of the characters. It doesn't make too much of a difference, however; the characters in the Japanese version were pretty much only connected to the original series through name anyway, and the thematic elements remain intact in all localizations. Sadly, Lunar Knights ends on a cliffhanger with, so far, no sequel in sight. A Fan Translation for Boktai 3 does exist, however.

The series is as follows:

Now has a Character Page which is still under construction.