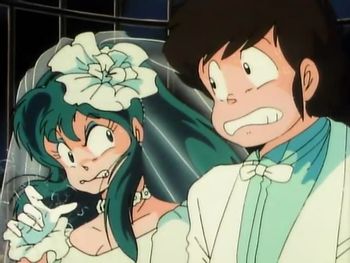 You could do worse.
"I don't have a wife. Zoe, why do I have a wife?"
— Malcolm Reynolds, Firefly, "Our Mrs. Reynolds."
Advertisement:

Be careful when visiting foreign parts or in the company of aliens, because you never know... you just might end up married. A character (almost always a male) discovers that a seemingly innocent action now entitles him to a permanent fashion accessory — an intense young lady who insists that they are now married. Sometimes it's a delusion on her part, but sometimes it's valid — at least by the rules of the place where she grew up.

Naturally, this never happens to someone who would be willing to just walk away and leave her stranded. Or, for that matter, to someone who's willing to bite the bullet, settle down with their accidental bride, and have two and a half accidental children.

When set in modern times, the trope usually takes the form of a joke, practice, or stage wedding that actually turns to be reveal after the officiant is revealed to be a legitimate minister or justice of the peace.

In real life, the possibility of a legally-binding Accidental Marriage (at least in North America) is pretty remote. Although courts in both the U.S. and Canada have decreed that a couple who thinks they're legally married are legally married, in most cases a marriage isn't considered valid without a marriage licence, which has to be obtained from the government before the wedding —- contrary to many fictional depictions which show the paperwork being done after the ceremonial part. Likewise, in most places both parties to the wedding have to buy the licence together, meaning there are quite a few bureaucratic checks and balances in place intended to prevent fraudulent or forced marriages (and earn some money for the local government, too).

Additionally, the "getting drunk and waking up married" type is not valid either, since the law requires that both parties enter into the relationship voluntarily and in full possession of their faculties.

Many religions, meanwhile, have instituted "formation programs" (such as the Catholic Church's "Pre-Cana" program) which serve as instruction courses in what marriage is supposed to be, "cooling off periods" for those who might be inclined to get married hastily, and screening programs to weed out those who are not intending to be faithful or who are under duress, drunk or who accidentally said the wrong thing while grabbing an Oni's horns.

The closest real-world example of this trope is probably Las Vegas (not coincidentally, a very common setting for "surprise marriage" type storylines) due to the fact that unlike many states, Nevada does not require a waiting period between obtaining the licence and the marriage itself, and that the Clark County marriage bureau office in Las Vegas is open until midnight every day of the year, even weekends and holidays.

Sister Trope to Accidental Proposal (indeed, that trope can often lead to this one). Compare Real Fake Wedding, and "Not Really Married" Plot.

When the alien culture happens to interpret a seemingly innocuous gesture as a challenge to a duel to the death, see Fumbling the Gauntlet.

"You may kiss the bride!"

"You may kiss the bride!"