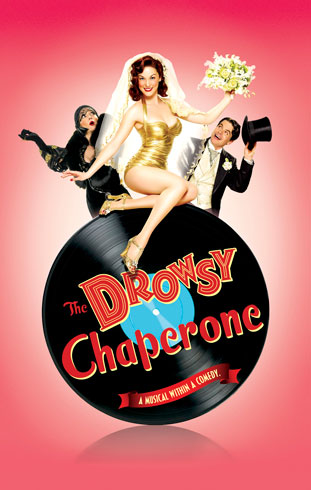 The Drowsy Chaperone is a musical which opened at the Toronto Fringe Festival in 1998 and then on Broadway in 2006, described by the Tag Line as "a musical within a comedy". The frame story is about a lonely man named..."Man In Chair", who lives alone with his record collection. One day he feels blue, and so puts on a record from the 1920s - The Drowsy Chaperone. The majority of the musical is the record itself, with comments interjected now and then from the Man to...somebody.

The story of The Drowsy Chaperone is about the wedding of Janet van der Graaff and Robert Martin. Janet has doubts about her feelings towards her fiancee, and when she comes across Robert conveniently blindfolded, she pretends to be a French woman and seduces him into kissing her. Of course, Hilarity Ensues as she confronts him about this kissing. Along the way, various other characters end up with marriages that they may or may not want, forcing best man George to arrange four marriages when he had originally only planned on one. Then a plane flies in, and they all get married and go to Rio!

...It Makes Sense in Context. Sort of.

As a result of its premise, The Drowsy Chaperone has more Lampshade Hanging than a hardware store, usually (but not always) provided by the Man In Chair.