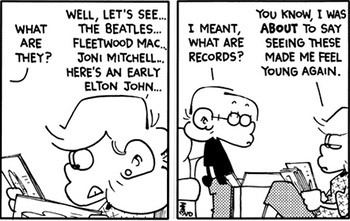 An adult digs up their old record collection out of the attic and their kid asks what they are. The parent nostalgically names all the singers of their day whose works have been put to their vinyl discs. Then the kids says, "No, I mean, what are records?"

A subtrope of Technology Marches On, initially fueled by the novelty of the notion that a format of media could actually become obsolete. It bears mentioning that it started cropping up in fiction before 1990, and the characters unfamiliar with records were full-grown adults, meaning that in its earliest form the trope ran on shameless hyperbole. Even in the 21st century, though, its realism is dubious. Most young people do indeed know what a vinyl record is (from more recent media depictions if nothing else), even if they never listened to or owned one themselves and don't know whether a "seven inch" was an album or a single, or whether 45 rpm came before or after 33 1/3. Modern DJs still use them, for instance, and their appearance in pop culture is almost ubiquitous. They've also been undergoing a resurgence of popularity

among audiophiles, hipsters, indie music fans and even teenagers since 2007 (Sony is even pressing records again), thanks to their retro appeal and their exemption from the abuses of the Loudness War, and even outsold CDs for the first time in over 30 years in 2019. Consequently, while they still haven't overtaken streaming in terms of revenue, their renewed semi-popularity started to be acknowledged in mainstream media at the end of the 2010's, making this a Discredited Trope with regards to records themselves.

This trope can also be used for 8-track tapes, of course (arguably more understandable, since many people know of 8-track but don't know what the actual cartridge looks like). It likely already applies at least to some degree for both cassette tapes and videocassettes, as both are no longer being made en-masse and generally only appeal to niche markets. Wikipedia reports that whereas 442 million cassette tapes were sold in the U.S. in 1990, by 2016, the number was just 129,000. The last major Hollywood film to be released on VHS in the United States, Cars, was in 2006.note If you want to get technical, the format persisted for slightly longer in other countries, with the last VHS release in the world being a South Korean release of Inception in 2010.

In this age of legal streaming and downloading of music, movies, video games, and other software, sooner or later the whole notion of going into a store and buying a physical object with stored data will be part of the history books (well, the history e-books if paper books also become obsolete due to e-readers). Basically, what Before My Time is to cultural references, this trope is to technology.

Ironically, this trope may be responsible for more people knowing just what records and other stuff are, if they saw this being used in media and wanted to know just what the joke was. Also, the fact that something is not in active use anymore doesn't mean people will have no idea what it is. Papyrus hasn't been used for centuries, and people still know what it looks like and what it was used for.

Not to be confused with the record label of the same name, owned by David Wilcox. Contrast Technologically Blind Elders, the inverse.

Even in 1992, records were already being considered a dead format!

Even in 1992, records were already being considered a dead format!