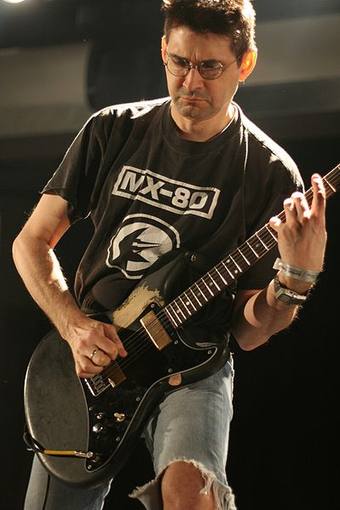 "It always offended me when I was in the studio and the engineer or the assumed producer for the session would start bossing the band around. That always seemed like a horrible insult to me."
—Steve Albini
Advertisement:

If you looked up Invisible Producer in an illustrated dictionary, Steve Albini would be the picture. His style has such hallmarks as recording live with minimal overdubbing, using microphone placement to get some harsh guitar and drum sounds, keeping the vocals low in the mix, and completely averting Executive Meddling: he prefers to not be credited (if the company insists, he prefers the term "recording engineer"), doesn't collect royalties, and lets the artist/band make all the creative decisions. Due to his stereotypical association with producing critically acclaimed harsh albums, there's a degree of surprise whenever he works with more "mellow" artists like Joanna Newsom and Nina Nastasia.

Albini is also famous for having a big mouth, being very liberal with throwing insults and nastiness around (ask The Pixies, Liz Phair, Urge Overkill, and The Smashing Pumpkins about it sometime), harsh criticism of the music industry's practices, and being something of a Luddite: he refuses to record in anything but analog, and back in The '80s he disparaged the CD as being "the rich man's eight-track tape". On the other hand, for several years he and his wife (along with others) have also functioned as something of a secret Santa

to cash-strapped families in Chicago, distributing money, clothes, and toys at Christmas. He also has a food blog

As a musician, Albini plays guitar, bass, sings and programs drum machines. He was a member of the following bands: