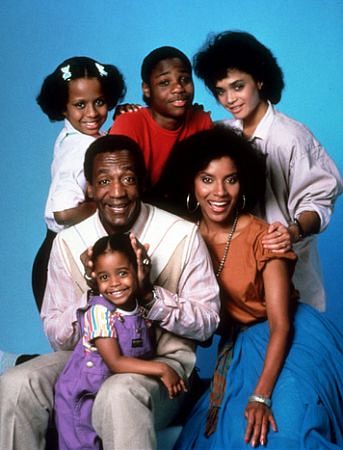 "I am your father. I brought you in this world, and I'll take you out!"
Advertisement:

'80s Dom Com that anchored NBC's Thursday-night lineup from 1984 to 1992. The show was loosely based around some of Bill Cosby's best-known standup routines, which were in turn based around his real-life family. Here he stars as loveable obstetrician Heathcliff "Cliff" Huxtable, alongside his gorgeous lawyer wife Clair (Phylicia Rashad), and their five children, ranging in age from post-collegiate to preschool (as of the first season): Sondra (Sabrina LeBeauf), Denise (Lisa Bonet), Theo (Malcolm-Jamal Warner), Vanessa (Tempestt Bledsoe), and Rudy (Keshia Knight Pulliam).

Featured a rare inverted Chuck Cunningham Syndrome — in the opening episode the parents have the exchange, "Why do we have four children?" "Because we did not want five!", but it's later revealed that they do indeed have five. In later seasons, when Rudy had outgrown Cosby's trademark 'kids do the darndest things!' gags, the show introduced a Cousin Oliver in the form of Denise's stepdaughter Olivia, played by Raven-Symoné.

In most important respects, this was one of the most successful examples of the genre, dominating the ratings in the '80s (it was the top-rated show for five years in a row). It was heartwarming and likely to end in An Aesopnote Sometimes fair, sometimes not. if not a full-on Golden Moment.

The show is still notable for being one of the earliest successful TV series to center on well-to-do African-Americans, without making an issue of (though not ignoring) their race. In fact they considered the key part of the premise being that Cliff and Clair were college educated and practiced prestigious trades, where most other sitcoms (white or black cast) were blue-collar in nature.

Spawned a popular college-themed spinoff, A Different World, in 1987. Not to be confused with Bill Cosby's earlier TV outing in the nearly-identically named series The Bill Cosby Show, or his much later series Cosby (which reunited him with co-star Phylicia Rashad).