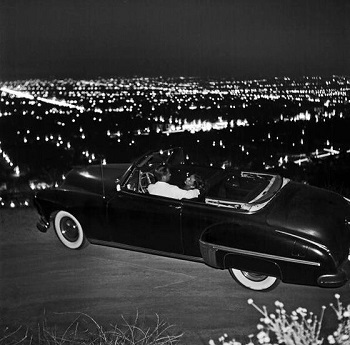 A standard teenage hang out where all sorts of canoodling takes place in cars. Usually features a father and/or police finding young people there to "break it up" and drag people back home. Depending on the broadness of the comedy (and the innocence — or lack thereof — of the setting), Don't Come A-Knockin' may be in play.

Often involves a tourist-trap-type scenic bluff, so as to overlook the city lights at night...as if you're looking at that when you're up here. Alternately, it could be a Drive-In Theater. Also a standard set up for Death by Sex in horror movies, as the people in the car are... distracted, to say the least. Similarly, it seems being at Make-Out Point makes you immediately a Weirdness Magnet — the first people to see the falling meteor, the mutant escapee, or the alien invasion force tends to be such a couple; see Terror at Make-Out Point.

Often, starting in The '50s, the makeout place is a Drive-In Theater.

In Season 4 "Seaplane!" Bob and the kids need to get to Quippiquisset Island a.k.a., "Quickie Kiss-It" Island, a make-out island.

In Season 4 "Seaplane!" Bob and the kids need to get to Quippiquisset Island a.k.a., "Quickie Kiss-It" Island, a make-out island.