Only One Finds It Fun 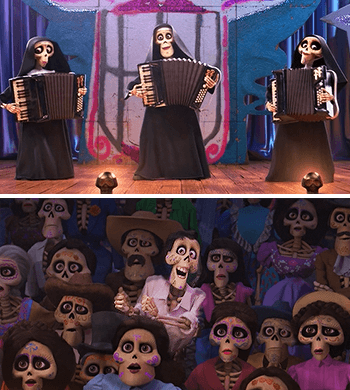 Spot the Polka Dork.
Calpernia: All right everyone, gather round and take a seat! I hope you're all as excited as I am, because... IT'S LECTURE DAY!!!
Saffron: Ughh kill me now...
—Cursed Princess Club
Advertisement:

They say that you can't please everyone, but this trope is for when something meant to please a whole group of people only pleases one of them.

The thing could be some food, a drink, a joke, a story, a trip, basically anything, but it has to be designed to be enjoyed, however, only one person enjoys it.

This is nearly always Played for Laughs and usually says something about the sole enjoyer in question. Maybe they're very optimistic, weird or both. They may also be stupid, or at least considered as such by the rest of the cast. If it's a joke, maybe they're easily amused or have a peculiar sense of humour. If it's food, they might be an alien or a pet or whatever with a different palate from the average human, or possibly just a human who eats weird stuff (it might also serve to demonstrate how bad a chef the cook is or that the cook likes to experiment). If it's an outdoor activity, maybe they're a Nature Lover.

When it doesn't say something about the character, it's often because everyone else is having very bad luck and the one person who enjoys it is just lucky. For instance, there might be a camping trip that's a Horrible Camping Trip to all but one.

It might also be because the character is the friend/lover/family member of the person who brought the thing into existence (told the joke, made the cookies, etc).

Can overlap with Stock "Yuck!", Incredibly Lame Fun, Stylistic Suck, Epic Fail, Low Count Gag, and Lame Pun Reaction, and can also overlap with Museum of Boredom, Tough Room, and Nature Is Boring (although those tropes are downplayed as they at least please one person). Compare and contrast the YMMV page Fun for Some, which is for when a few people find something fun that was never meant to be fun and Slow Clap for when only one person claps at first, but then gradually, everyone does. Also compare Abilene Paradox for when no one wants to take the course of action, but everyone agrees because they mistakenly think everyone else wants it. Contrast Somebody Doesn't Love Raymond, for when only one person dislikes someone. Can sometimes invert Even The Rats Won't Touch It by having only a rat or whatever want it. Compare Only One Who Likes Spam for the food equivalent.

While everyone dreads the position of Soopreme Leader of the KND, Numbuh 13 actually seems to want it. Though the other KND operatives dread that even more.

While everyone dreads the position of Soopreme Leader of the KND, Numbuh 13 actually seems to want it. Though the other KND operatives dread that even more.