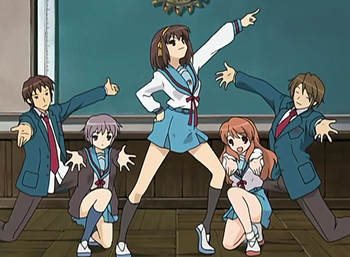 Is this a dancing anime?
Advertisement:

Worried about bait-and-switch writers who'll drop a drama bomb in your funny show? Look for dancing, because putting a dancing sequence during the show theme is a good way to indicate your show's overall goal of having fun. It's also a very quick way to show off the entire cast at once and make the Theme Tune more infectious by associating it in your head with dancing.

Because most shows use a more sedate song and static visual for endings, dancing there is usually done with simple — very simple — animation. If dancing is in the opening theme, this is often the most sophisticated bit of animation the show ever does.

An added source of humor is when, for the purposes of inclusion, a completely inappropriate character is included.

Some of these dancing sequences become popular enough that characters from other media are depicted copying the dances in fanwork.

Compare Five Man Band Concert and Opening Credits Cast Party. For the Dancing Theme where they're in kimonos, see Ondo.