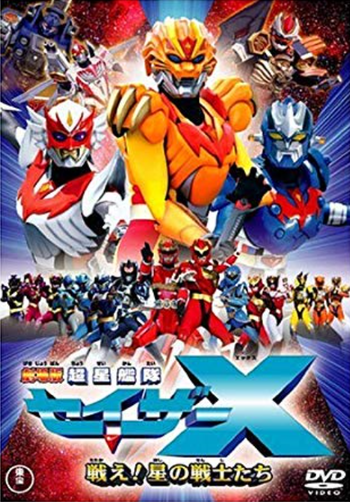 In the year 2500, the Earth has been conquered and covered in eternal darkness by an evil empire known as "Neo-Descal", which now seeks to take over the entire universe. With no other options left, the last remnants of Earth's armada send three of their ships through a wormhole that takes them back in time to the year 2005.

According to the history books of the future, this was the year where three legendary Space Pirates from the "Descal" fleet conquered Earth by capturing the twelve mystical Cosmo Capsules and using their power to plunge the world into darkness. For the sake of averting this Bad Future, the heroes of the future recruit a modern man (Takuto Ando) to complete their Power Trio and form the Super Star Fleet, Sazer X.

It received a theatrical film in Chousei Kantai Sazer-X the Movie: Fight! Star Warriors, which was also a crossover between it and the previous two Chouseishin installments.