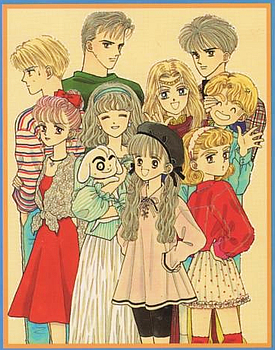 Tokimeki Tonight (ときめきトゥナイト, lit. Heart-Throbbing Tonight) is a Shōjo manga series by Koi Ikeno which ran in Ribon magazine from 1982 to 1994, with 30 volumes. The plotline spans 3 generations of the Etou family. Years after the original manga was published, a reimaging of the series called Tokimeki Midnight was published in the magazine Cookie Box with 9 volumes.

This series is about a girl named Ranze Eto, a girl who looked like an Ordinary High-School Student, but her family is something that came straight out of The Addams Family. You see, her father is a vampire and her mother is a werewolf. And it also turns out that Ranze has special powers of her own: for example, whenever she bites anything, she can change herself into a carbon copy of that object, whether it's another person or an inanimate object such as a piece of bread. Only by sneezing can she return to her normal self.

On her first day of school, Ranze meets a handsome guy named Shun Makabe. The chief problem with this is that Ranze's parents will not allow her to date a human (and in fact have already arranged a marriage for her with a boy in the demon kingdom) - although there may be much more to Shun than meets the eye. On top of this, Ranze also has a bitter rival in the pretty but spiteful Yoko Kamiya, the daughter of a yakuza boss, who is also in love with Shun (and has been for a while) and doesn't take kindly to Ranze intruding on her turf.

The manga was adapted by Toho, with Group TAC as animation studio, into an anime that ran at 34 episodes on Nippon Television from October 7, 1982 to September 22, 1983 and was directed by Tatsunoko Production veteran Hiroshi Sasagawa, famous for Gatchaman and the Time Bokan series. The anime was frequently preempted for baseball broadcasts and quickly fell into obscurity in Japan, but is much loved in Italy and the Middle East.

Must not be confused with Konami's Dating Sim series Tokimeki Memorial.