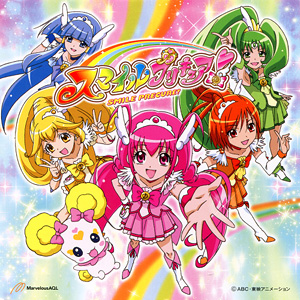 The five lights that guide us to the future! Sparkle! Smile PreCure! Click here to see the Glitter Force version Time to blaze away to a happy ending! Shining bright, here comes the Glitter Force!
Advertisement:

Smile PreCure! is the 9th entry in the Pretty Cure franchise, which aired from February 2012 to January 2013.

Once Upon a Time, there was a kingdom of fairy tales called Märchenland where all the good characters lived together in harmony. However, one day the kingdom was attacked by the evil characters of the Bad End Kingdom, led by the Evil King Pierrot. At the climax of the conflict, both the Queen of Märchenland and Pierrot were sealed away by each other, leaving the ending to the story unfinished.

Miyuki Hoshizora is a New Transfer Student who absolutely adores fairy tale books, and hopes that one day she too will live Happily Ever After. Her first day gets off to a wild start when she literally comes face-to-face with Candy, a fairy from Märchenland sent to recover the scattered Cure Décor that can revive the Queen.

Faced with the agents of the Bad End Kingdom, who seek to plunge humans into despair and collect the resulting "Bad Energy" to revive Pierrot, Miyuki's belief in standing strong against adversity despite her own fears grants her the power to transform into one of the legendary warriors, Pretty Cure. It's just a shame that no-one told Miyuki that part of being a "legendary warrior" is actually fighting.

Eventually, Miyuki assembles a complete team of Precure from her classmates:

An English adaption from Saban Brands, under the new title of Glitter Force, was streamed worldwide (excluding Asia)

on Netflix. Saban's localization reduced the original forty-eight episodes to forty episodes split between two twenty-episode seasons. The first season premiered on December 18th, 2015, followed by a second season on August 26th, 2016. In 2018, Hasbro owned the rights to the program alongside other Saban Brands entertainment assets,

There is a sequel novel for Smile Pretty Cure! set after a ten year Time Skip following the end of the show.

Smile Pretty Cure has examples of:

Example of:
Break Them by Talking