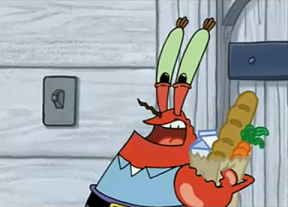 That milk had better come from sea cows.
"All grocery bags must contain at least one stick of French Bread."
— ''Hollywood Rule Book,''

If a character lives in The City and has just come home from shopping, they will inevitably be carrying a single brown paper bag from which protrudes a baguette (loaf of French bread) and the greens of a bunch of carrots or celery; neither of these will be separately wrapped or packaged. If the bag is emptied on-camera (perhaps in a Meet Cute), there will also be a quart of milk and a dozen eggs. Optionally, orange juice and/or a cut of meat may be present.

Also, the astute shopper who purchases a pair of oranges is preparing to drop said sack or have it knocked out of their hands. (These will likewise not be prepackaged or in a produce bag.)

These items are typically chosen for the audience's sake. Despite the growing popularity of reusable grocery bags, the brown bag is universal in design and still recently used enough to communicate the character went for groceries. Also, note that many of the items listed have an oblong shape or are usually contained in rectangular containers; this lets them stick out noticeably from the top of the bag to be easily identified.

The trope name plays with the International Organization for Standardization

's tendency to establish consistent standards. If a person in a movie is carrying a grocery bag filled with Twinkies, Mountain Dew, beer and pasteurized process sandwich spread, the audience will focus on that; ISO-Standard Urban Groceries, on the other hand, are generic, non-specific things that people would imagine everyone buys on a usual grocery trip, and thus merely communicate that's what the character has done.

Because commodity foodstuffs are often sold loose or unlabeled, this trope may have its origins in avoiding Brand X or Product Placement issues. Subtrope to Stock Food Depictions. See also Baguette Beatdown. May or may not be related to Villains Out Shopping. Has nothing to do with the other ISOs.