I Was Told There Would Be Cake 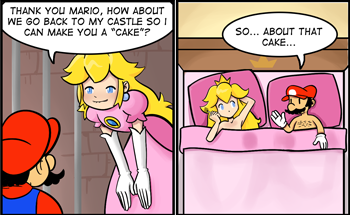 You are on the wrong page. This is actually Hot Coffee!
"Ladies! Gentlemen! Everybody stop what you're doing for a sec. I have gained access to a cake!!"
— T-Rex, Dinosaur Comics
Advertisement:

Cake — the ultimate reward. Seriously, it seems like in games one of the standard rewards you can give someone, other than gold, XP or power stars, is cake. It's sweet, it's lovely, and it's something you normally only get at birthdays and weddings. The perfect way to shrug off the stresses and worries of saving the world — cake.

Can overlap with The Cake Is a Lie, as long as the promised reward is cake.

And, of course, ever since the release of The Orange Box, the appearance of this Trope makes it inevitable that somebody will reference Portal's promises of cake.

A subtrope of Food as Bribe, which is all food bribes that aren't cake. If the cake is your only motivation for doing something, you might be Just Here for the Free Snacks. If someone stole your cakes, then That's Terrible.

This Trope page was supported by the Society For Cake Promotion

Warning: Stress relieving properties of cake are stated for dramatic purposes only. Overconsumption of cake may lead to obesity, increased likelihood of cardiovascular disease, Type-2 diabetes, and the accumulation of pink frosting on the tip of your nose.