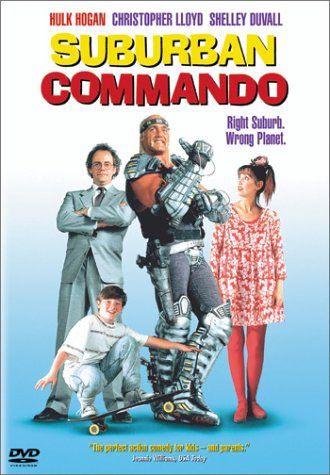 Suburban Commando is a 1991 sci-fi comedy film directed by Burt Kennedy and written by Frank Capello for professional wrestler Hulk Hogan. In it, Hogan plays Shep Ramsey (not to be confused with Chef Ramsay), an interstellar peacekeeper who loves justice but hates sitting around. After failing to thwart an evil plot by General Suitor (William Ball), Shep is contacted by his superior Zanuck (Roy Dotrice) while returning home in his ship. When Zanuck suggests he take a vacation, an annoyed Ramsey smashes his ship controls, discharging all of his ship's energy, forcing him to land on a planet and recharge his ship for six weeks. The planet? Earth. Hilarity ensues as he becomes neighbors with overall wimp Charlie Wilcox (Christopher Lloyd) and tries to understand Earthly customs... and contend with the forces of arch enemy General Suitor after Charlie fooled around with Ramsey's equipment, which had sent a signal to Suitor of Ramsey's location.