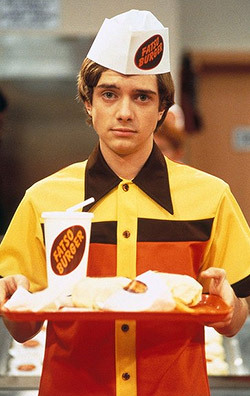 You can practically see his soul being crushed.
"In case you've forgotten, here's how things work: I order the food, you cook the food, then the customer gets the food. We do that for 40 years, and then we die."
— Squidward to SpongeBob, SpongeBob SquarePants, "My Pretty Seahorse"
Advertisement:

The fictional fast food restaurant is a unique establishment. It's the most common first job for a TV teen, and will usually teach them a lesson about money, responsibility, or life, mere moments before they quit or are fired for odd reasons. Usually, they are spurred to employment by a specific financial need, and a failure of "The Bank of Mom and Dad" to pony up.

But the fast food joint seems to deliberately go out of its way to torture the unfortunate teenagers and/or unlucky adults who work there. This includes the ridiculous outfit they are required to wear on the job — a silly hat, featuring a cartoonish version of what they serve, is almost a given, along with mandatory happiness enforced by their pointy-haired manager. Kids or teens may be threatened with working there forever if they don't finish high school, don't attend college, and/or don't do well in either. Or if they only obtain A Degree in Useless. This is, however, a Cyclic Trope; during economic downturns, even people who "did everything right" can still find themselves working in or applying to these types of positions.

The standard foil is for the show's underdog to thrive in this environment to the total befuddlement of the "cool" characters who have been successful at everything else except this. Ironically, this can have the reverse effect; after all, who would be proud of working at a fast food joint?

Wikipedia refers to these as "McJobs

". In reality, these jobs can be Truth in Television, but there's an equal chance of them being better or even worse than depicted, because it depends on an individual restaurant's quality of management and workers. The median age of fast food workers is 29

, which is quite a bit older than high school or college age. The ridiculous headgear, fortunately, is universally less common than it is in fiction as a simple baseball cap, visor, or hairnet is more common to comply with hygienic regulations.

Sometimes, the character tends to have braces to show that they are a young, uncool nerd stuck working at a dead-end job.

Similar workers can be found at Suck E. Cheese's. For the non-restaurant alternative, see Soul-Sucking Retail Job. Compare to Apathetic Clerk. On the other hand, some find Happiness In Minimum Wage. The next step up the "ladder" is working at a Kitschy-Themed Restaurant.