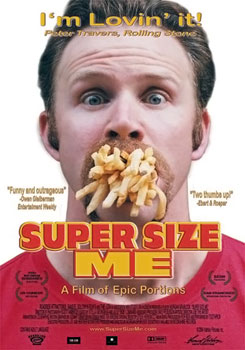 "This is the best part of the day, when I get to be fat, on the bed, with my quart of Coke."
— Morgan Spurlock
Advertisement:

Super Size Me is a 2004 documentary made by Morgan Spurlock, which follows him as he attempts an experiment to only eat McDonald's food for 30 straight days.

This experiment is used as a framing sequence as Morgan takes a cross-country look at the various facets of fast-food culture in the United States, including its effects on the human body over a sustained period of time, diehard fast-food fans, the use of processed food in the American public school system, and the impact of fast-food on American society and business.

The rules of Morgan's experiment are:

As a result, Spurlock ends up suffering from various health problems, such as lethargy, depression, headaches, a reduced sex drive, heart palpitations and weight gain. However, Spurlock completes the experiment, and concludes that fast-food can have incredibly damaging effects on the human body if eaten consistently and constantly, as well as stating that the experiment was an extreme case.

The film was generally well-received, and earned over $11 million dollars (against a $65,000 budget) at the box office. Soon after this documentary was released, McDonald's stopped offering the super-size option for their meals and introduced a 'Go Fit!' meal. Whether or not McDonald's instituted these changes to save face after the movie came out is unclear; McDonalds itself claims they actually started phasing out the super-size in early 2004 (the film was released in May of that year) and had already been market-testing healthy alternatives. On the other hand, Spurlock is shown continuously reaching out to them throughout this period, but their spokesperson kept stalling for an interview (which ultimately never materializes), so they were at least aware of the negative press coverage they were likely to get.

Super Size Me inspired a great deal of criticism from the scientific community, including several counter-documentaries (such as Fat Head) which pointed out serious flaws with Spurlock's film (such as the fact that he was a vegan before the supposed experiment, not just his at-the-time girlfriend that he mentioned).

Years later, Spurlock would produce a sequel, Super Size Me 2: Holy Chicken!, where he decided to open his own chicken restaurant to uncover how fast-food tries to pass itself as "healthy".

Tropes applying to this documentary are: