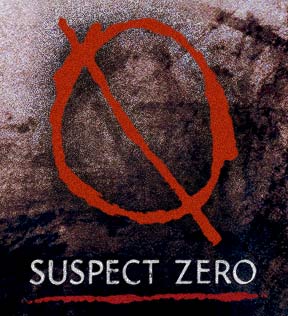 To catch a serial killer, think what he thinks, see what he sees.
Advertisement:

Suspect Zero is a psychological thriller directed by E. Elias Merhige, starring Aaron Eckhart, Ben Kingsley, and Carrie-Anne Moss. The film was released in the United States in 2004 by Paramount Pictures.

Thomas Mackelway (Eckhart), a formerly decorated agent who operated out of the Dallas regional division of the FBI, has stirred up controversy by ignoring extradition law in order to bring a suspected serial killer back from Mexico to stand trial... in the process both losing his position and having the killer get Off on a Technicality. Months later, Agent Mackelway has been "sent to the minors" by being transferred to a quiet division in New Mexico. The quiet doesn't last long, as on the day he arrives, he receives a strange fax consisting of several missing persons files. Before he can determine what the fax means or who sent it, he is called out on his first case since his transfer. A salesman from southern New Mexico has been murdered and his body left directly on the state border, placing the case under federal jurisdiction. A quick glance at the victim's body reveals that this is far more than a robbery-homicide... as after he was stabbed to death, the killer took the time to remove one of the victim's eye-lids.

As the investigation continues and more bodies are discovered, each missing an eyelid and left with a small piece of paper on which only the number zero is drawn, it quickly becomes apparent that the FBI has a serial killer on their hands. With each new victim, more and more faxes addressed to Mackelway are received at headquarters, not only revealing further missing persons, but also information about the recent murders, newspaper articles detailing Mackelway's past work... and, chillingly, hand-drawn images depicting Mackelway as he investigated a crime scene mere hours before. Agent Mackelway soon realizes that the faxes are being sent by the killer, a man identifying himself as "O'Ryan" (Kingsley.) Together with Agent Fran Kulok (Moss), his former partner from the Texas branch, Mackelway vows to find O'Ryan and put a stop to the killings once and for all... but first, he must figure out why O'Ryan is so obsessed with his past, and what the serial killer truly hopes to accomplish in taunting Mackelway to solve the case.