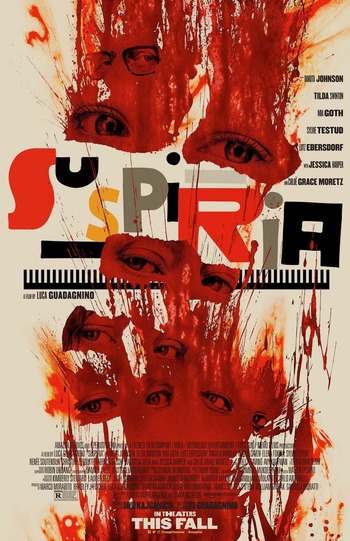 Give your soul to the dance.
"It's all a mess. The one out there...the one in here...the one that's coming. Why is everyone so ready to think the worst is over?"
— Susie Bannon
Advertisement:

Suspiria is a 2018 supernatural horror film directed by Luca Guadagnino and written by David Kajganich, starring Dakota Johnson, Tilda Swinton, and Mia Goth among others, with music composed by Thom Yorke. It is a very loose remake of the 1977 Dario Argento classic of the same name.

In 1977 West Berlin, Susie Bannon (Dakota Johnson) is a young American woman studying at one of the most renowned dance schools in the world: the Markos Tanz Company. As her skills gain the attention of head artistic director and choreographer Madame Blanc (Tilda Swinton), a series of mysterious disappearances occurs, leading Susie, her friend Sara (Mia Goth), and the grieving elderly psychologist Dr. Josef Klemperer ("Lutz Ebersdorf" note actually Tilda Swinton under heavy makeup) towards an investigation into the school that reveals dark secrets that the instructors likely wished to keep hidden.

Guadagnino's Suspiria takes the original's story and atmosphere in a wholly different direction, changing its setting to the same year the original was released and eschewing Argento's famous exaggerated color schemes for bleak, wintry tones, among other modifications. He has described the film as an homage to the emotions he felt watching the original more than an explicit remake of it.