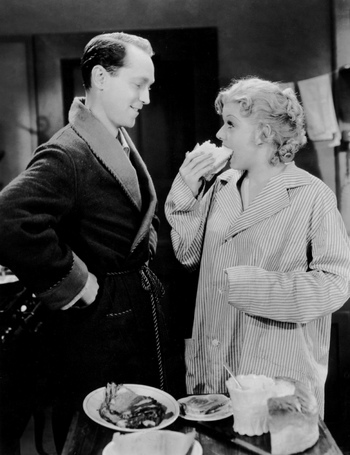 Suzanne Trent (Harlow) is an American showgirl in London in 1914. Suzy has grown tired of struggling on the fringes of show business and has decided to use her good looks to land a rich husband. Instead, she winds up falling for Terry Moore (Tone), a humble but smart fellow who works in a factory and has invented his own aircraft stabilizer.

Suzy and Terry get married. But just a few hours after saying their vows, Terry gets shot—it turns out that his boss at the factory was a German spy. When the landlady screams "She did it!" as Suzy bends over the body of her husband, Suzy dives out the window and runs for her life, running all the way to France.

The movie's set in 1914 for a reason, as Suzy makes it to Paris just in time for World War I to break out. She gets a job as a singer in a nightclub, and meets handsome, rich French flying ace Andre Charville (Grant). Andre sweeps Suzy off her feet, and she gets married again. Unfortunately she doesn't know two things. First, the suave, charming Andre is actually a cad who basically forgets about Suzy after a while and cheats on her every second that he can. Second, Terry isn't dead.

Grant's only screen pairing with Harlow, who died of kidney failure a year later. Also a rare example of Grant playing an unsympathetic character.