Film / Tales from the Hood 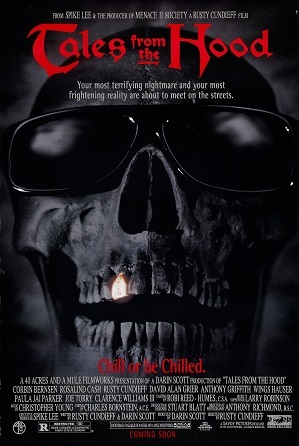 Tales from the Hood is a 1995 horror anthology film, directed by Rusty Cundieff. The film features four short Hood Film-themed horror stories, with a Framing Device that is itself a horror story. The film opens when three young gangstas—Ball (De'aundre Bonds), Bulldog (Samuel Monroe, Jr.) and Stack (Joe Torry)—in South Central Los Angeles visit a mortuary to buy drugs from its owner, the mysterious Mr. Simms (Clarence Williams III). The drugs are stored deep within the building, and as Mr. Simms guides the men through the funeral home, he takes the time to narrate stories relating to his four most recent "customers." In his words, "Death - it comes in many strange packages."

Rookie cop Clarence Smith (Anthony Griffith) witnesses his partner Newton (Michael Massee) and fellow cops Strom (Wings Hauser) and Billy (Duane Whitaker) brutally beat city councilman and black rights activist Martin Moorehouse (Tom Wright), who has been on a campaign against police corruption. When Clarence tries to stop it, Newton convinces Clarence that Strom and Billy will take Moorehouse to the hospital; instead, they kill Moorehouse and posthumously ruin his reputation by planting some of the drugs they've been dealing in his car and injecting him with heroin. Guilt ridden, Clarence resigns from the force and becomes a drunk. One year later, he sees a mural of Moorehouse come to life, demanding Clarence to bring his killers to him. When he does, Moorehouse rises from the grave to exact his revenge.

Boys Do Get Bruised

Walter Johnson (Brandon Hammond) is a quiet and sensitive boy with an interest in drawing pictures who is bullied at his new school. He often shows up to class with various bruises, none of which comes from his bullies. His teacher, Mr. Garvy (Cundieff), suspects Walter is the victim of an abusive parent, but Walter claims that the bruises were caused by a monster that terrorizes him every night, to the point that he believes he must kill the monster before it kills him.

Duke Metzger (Corbin Bernsen), a character named for actual white supremacists David Duke and Tom Metzger, an obnoxious and highly racist former Klansman turned Senator decides to set up his gubernatorial election campaign in the former plantation of his ancestor, Nathan Wilkes, who killed all his slaves after the end of the Civil War rather than let them go free. It is rumored the plantation is still haunted by the ghosts of the slaves, who, thanks to a voodoo priestess, now inhabit dolls scattered throughout the plantation. True to form, Metzger ignores this, but the rumors are completely true, and the animated dolls are more than happy to settle for exacting brutal revenge on their killer's descendant.

In an apparent shout-out to Jacob's Ladder, violent and hardened gangster Jerome Johns, better known as Crazy K (Lamont Bentley) is gravely injured in a late-night ambush. Before he can be killed, the police end up killing his attackers, but Crazy K is still arrested, sentenced to life in prison without parole. Four years later, Dr. Cushing (Rosalind Cash) decides to test out an experimental method of rehabilitating prisoners, and asks Crazy K to be her test subject in exchange for being released from prison. Crazy K agrees and he is transported to her private facility, which soon proves to be a Kafka-esque nightmare, where he is put through horrific experiences that become increasingly surreal and nightmarish.

Back in the frame story, the dealers grow tired of Mr. Simm's storytelling and resort to threats to procure their product, but Simms has one last surprise for the trio.

A sequel, Tales from the Hood 2, was released in 2018, with Keith David taking over for Williams as Mr. Simms as he assists Corrupt Corporate Executive Dumass Beach in laying the groundwork for the morality of a new model of artificially intelligent police robot. A third movie Tales from the Hood 3 (released on October 6, 2020) has Tony Todd starring, as William, a lumbering man in his 50s, trying to outrun an unseen evil with a six-year-old child named Brooklyn, who tells stories to William distract them from said evil.