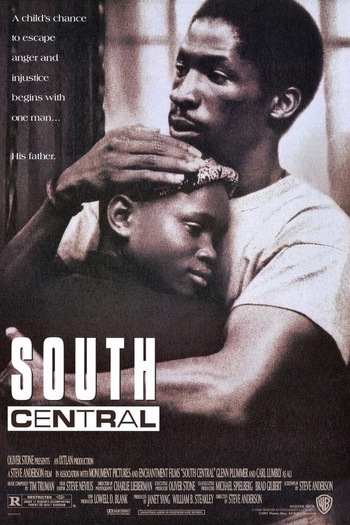 South Central is a Hood Film released in 1992, produced by Oliver Stone and written and directed by Stephen Wilburn Anderson, based on the novel Crips by Donald Bakeer.

True to its name, the film is based around an African-American street gang in South Central Los Angeles, of which protagonist Bobby Johnson (Glenn Plummer) is a member, and wastes no time reconnecting with his comrades. Upon getting out of jail, Bobby finds out that his girlfriend gave birth to his son while he was incarcerated, and is now hooked on drugs, prostituting herself to get her fix. He sees that she's getting pimped out by a heroin dealer who goes by "Genie Lamp", and after being threatened by him, decides to take revenge by killing him. Evidence being left at the scene of the crime and him refusing to snitch gets him incarcerated again, and allows his son to be raised by the streets. Hearing about what his son has become motivates Bobby to wise up and get out of prison as fast as he can.