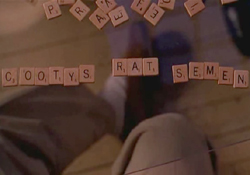 Sneakers is a 1992 film directed by Phil Alden Robinson. Featuring an All-Star Cast, the film is a complex thriller about a team of slightly shady security experts who find themselves in a conspiracy about cryptography, espionage, secrets, and betrayal.

Martin Brice (Robert Redford) and his best friend Cosmo (Ben Kingsley) spent their youth hacking into computer systems and 'sharing the wealth': ten thousand dollars here, thirty there, and all sent to various freedom-loving (and somewhat anarchistic) agencies. Despite their precautions, the Feds catch onto Martin and Cosmo; Cosmo is arrested and goes to prison, while Martin — who was out buying pizza for the hungry hackers — flees to Canada, changes his name, and disappears.

Twenty-three years later, Martin Bishop is the team lead for the Sneakers, a team of security analysts who expose the weaknesses in the security systems of banks, corporations, and anybody else who'll cut them a cheque. This very disfunctional crew consists of:

Then there's Liz (Mary McDonnell), Bishop's ex-girlfriend. She's fond of "the boys", but wants no part of their crazy schemes.

Unfortunately for all of them, Martin's latest assignment soon gets them entangled in a situation that quickly makes them targets for every major organization in the world, and could lead to the downfall of civilization...