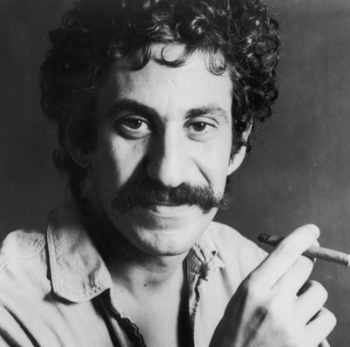 "If you dig it, do it. If you really dig it, do it twice."
Well I've had my share of broken dreams,
And more than a couple of falls,
And in chasin' what I thought were moonbeams,
I have run into a couple of walls.
But in looking back at the places I've been,
The changes that I've left behind,
I just look at myself to find:
I've learned the hard way every time.
Advertisement:

James Joseph Croce (January 10, 1943 – September 20, 1973) was an American Singer-Songwriter. His musical style contained elements of folk, country, pop, and blues, and was notable for its intricate fingerstyle acoustic guitar. His hits included "You Don't Mess Around With Jim," "Operator (That's Not The Way It Feels)," "Time In a Bottle," "Bad, Bad Leroy Brown," and "I Got a Name".

Born into a musical family in Philadelphia, Pennsylvania, Croce received his first instrument - an accordion - when he was five years old, though he didn't begin to take music seriously until college. While there, he became involved in the folk scene, and met his future wife Ingrid while judging a music competition. At the same time, he was beginning to collect the acquaintances and experiences that would later flavor his songs. He hung out with truckers and construction workers, and played gigs in dives and other rough venues.

After his graduation, Jim and Ingrid married and went to New York to try to start a recording career. While there, he signed a series of contracts with agents and managers that would prove disastrous later on. They recorded an eponymous album for Capitol Records, but failed to find any great success either there or on the road. Disillusioned, the Croces moved back to Pennsylvania, where Jim took various jobs and gigs (including a stint in the Army) to pay the bills. Their son, Adrian James - for whom "Time in a Bottle" was written - was born in 1971.

He finally got his big break in 1972, when he signed a three-album deal with ABC Records and went back out on the road. The tour was exhausting for Jim and his friend and lead guitarist Maury Meuhleisen, and financially disastrous for the Croces. Despite having multiple songs on the charts, and playing more than 300 shows per year, Jim was only bringing home $200 a week - a direct result of the contracts he had signed years earlier. After more than a year of this, he decided the strain on his health and marriage wasn't worth it, and resolved to leave the music business for good.

He never got the chance. On September 20, 1973, he and Meuhleisen played a gig in Natchitoches, Louisiana that had been postponed a year earlier. As their plane took off after the show, it hit a row of pecan trees and crashed; everyone aboard was killed. Croce was 30, Meuhleisen 24.

After Croce's death, the resulting publicity from the tragedy drew interest to his music, which resulted in a string of hit songs that would have him hailed as one of the great singer-songwriters of the 1970s.

Ingrid engaged in a lengthy legal battle to resecure the rights to her husband's songs - a fight that lasted into the 1990s, but was ultimately successful. She also owns and operates a successful restaurant, Croce's, in San Diego. Their son (who goes by A.J.) has followed in his father's footsteps, becoming a well-regarded singer and songwriter himself.

The life and music of Jim Croce provide examples of these tropes: